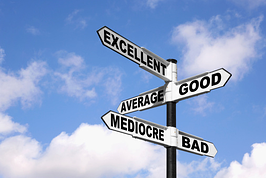 So you want to be the best, but you do not want to hire the best?

Joseph Joubert once wrote, “Mediocrity is excellent to the eyes of mediocre people" - to the rest of us in the corporate world, mediocrity could not touch excellence with a ten foot pole.

I have always believed that mediocrity should not be tolerated within a company, but I have had difficulty convincing clients and colleagues to jump onboard to my "Zero Mediocrity Tolerance Policy."

Too many managers and CEOs say they are committed to doing whatever it takes to create a WINNING company, but when it comes down to it they engage in a new-age mediocrity-based thought process of "everyone has a place here" and a "prozac leadership-based" mindset of "If we encourage our people enough they can do anything."

I now hail to a few researchers from University of Utah and Stanford University for compiling five years of data from a service company and finding that the data strongly suggests that mediocrity should not be tolerated in the workplace, especially if you are committed to being the best.

Where does mediocrity have the biggest impact on a company? At the top - where all problems start.

Here are the significant details from the study:

The choice of boss matters:

This finding is kind of obvious.  The better the boss, the better the results.  However, the data shows how significant having low performing bosses is to the bottom-line. Within the service company, bosses that were top performers increased each employee's output by about 1.3 units per hour more than the bottom performing bosses. When they did the math, they found that replacing a boss who is in the lower 10% of performance with a boss in the upper 10% of performance is about equal to adding another employee to a nine person team.

The main take-away from this data is that hiring bosses in the top performing bracket and ridding of the bottom bracket bosses will increase output from the boss and the employees.

There is something more important to a bosses' job than motivating employees:

The researchers also point out that the reason motivation is secondary is because motivation is often temporary, while skills are persistent. Think about it. . . You have an employee who is motivated by money, so you give her a raise to increase her performance. Unfortunately, once she is rewarded and the performance has increased, you will need to keep reinforcing her for that performance.  However, if you teach her the skills to excel, they do not need to be renewed.  Keep in mind though that motivating employees is still important, but you should first teach them the skills they need to succeed because this will have a lasting impact and reduce the amount of motivation you need. When employees are competent in the skills they possess, they actually like to do their job and less external motivation is needed because they are self-motivated.

In the service company, bosses in the lowest 10% were 67% more likely to leave the company in a year than those in the top 90%.  This data is somewhat paradoxal.  It is not a bad thing that the lower 10% are leaving - do you really want them around anyways after all the data that was presented above?

However, you know that turnover costs are high and replacing the boss can be extremely difficult. Also, what if you end up hiring another mediocre boss?  The last guy seemed to "have it all" when you reviewed him during the employee selection process.

Fortunately for you, the Rainmaker Group and talent management companies likes us have developed a validated employee selection process using pre-employment assessments that accurately predict whether a boss or employee will be mediocre or above average in their job position.

The most important step to being the best - to creating a high value company - is to hire the best people and assign them to the boss and job where they best fit.